Traffic Challenges, Mother’s Day at the Mall, Great Golf, and the real Michigan

It’s construction season again, or still, as we see a couple of projects sure to affect the blood pressure of those navigating their way around Marquette this summer.

U.S. 41 in Marquette Township is going through a major improvement project (didn’t we just do this?) that’s going to challenge drivers until it’s completed in November.  November!

There are alternative routes to help you get from here to there, but for the most part, any business you plan on doing from the Holiday Inn to Meijer is going to force you into the belly of the beast.  Just take a deep breath and enjoy the view.

Downtown Marquette is another story, or at least a short story when compared to the novel being written up the road.

The 100 block of West Washington is going through an improvement phase (as detailed in a previous Word post) that should be done before we hit July. 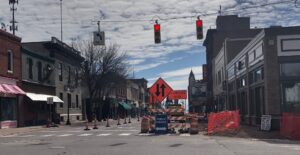 Until then though, there are quite a few businesses downtown that just went through the year of the pandemic only to find that the light at the end of the tunnel is going to be dimmed for a while longer.

A handful of downtown bars and restaurants are still trying to recover from 12 months of reduced everything and might need your patronage now more than ever.

Tami Blotter, owner of the popular frozen yogurt shop Yoop-Phoria, probably speaks for many of her fellow proprietors.  “I was a bit disappointed to hear about all the construction so soon after the reopening of the restaurants and other stores. It has been a long winter.”

But as that winter of discontent melts away with the spring sun, Blotter is also looking forward to better days ahead.

“I’m expecting a very busy summer after last year. I know a lot of tourists come from all over and I think this year will be no different.  I am hoping that we’re able to have other activities that will attract the tourists to come here like the music festivals and car shows.”

Ally Kolowena of the Aloha Grill in the Masonic Center echoes Blotter’s sentiments.  “In spite of the impacts on our business we understand that it is temporary and we’re looking forward to seeing the improvements to our neighborhood.”

Kolowena also has some ideas for how you can access her business as well as other downtown destinations.

“The best way for customers to get to our business would be to park in the Masonic Center Parking Structure between Washington and Bluff, enter through the rear of the building, and take the elevator to the Lower Level of the Masonic Center.”  Perfect for those counting their steps.

Just remember, temporary inconvenience… permanent improvement.  Or until they tear it up again.

Another Big Weekend at the Mall

Following the successful Home & Garden Show a few weeks ago, the Westwood Mall will again be hosting a big event this weekend with the TV6 Mother’s Day Craft Show.

Maybe the old girl has some life left in her after all.  No, not your mother… the mall!

With the return of Dunham’s, a church about to occupy the old JC Penny space, and the occasional trade show, the Westwood Mall seems to be mounting a minor, yet significant, comeback.

And why not?  Marquette Township is humming and the mall is right in the middle of it all.  There’s no reason why our one mall, still a viable facility, can’t compete with and actually complement downtown and the big boxers.

The characteristics that made malls attractive in the first place haven’t changed.  They still offer climate controlled shopping with all things under one roof.  And plenty of parking.  What’s wrong with that?

Along with the craft show, visitors will also be able to enjoy live music for a couple hours each day coming from The Stage, the live music studio creation of Todd Noordyk, he of local radio station ownership fame.

Noordyk sold 8 of his radio properties to Chuck Williams of mediaBrew a couple years ago but still has a jones for music… listening, playing, and recording.  So he rented the former Jandron’s Jewelry space in the mall and turned it into a soundstage.  Hence… The Stage.

Ideally suited for small bands and combos, The Stage has turned into somewhat of a destination for local audiophiles.  Noordyk says they host a variety of interests.

“It’s a rehearsal space, a place where friends and local bands can come and play, and we’re recording music as well.”

And this weekend, while the crafters mill about, The Stage will present Music in the Mall, showcasing different live bands both Friday and Saturday. 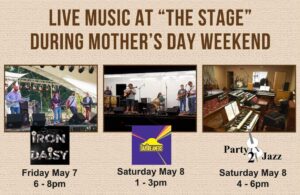 “We’re also open to hosting fundraisers or business-after-hours with LIVE music when those events can happen again.”

Marquette Music Scene’s Cindy Engle reflects the feelings of many local music fans.  “I feel any safe way to promote live music is what we need. These musicians want to play!”

Marquette Golf Club’s Greywalls course continues to get praise from a variety of sources.  Golfweek recently released its 2021 list of Best Courses You Can Play in the U.S. and Greywalls comes in at #28, just two spots behind Arcadia Bluffs, the only Michigan course higher on the list.  For reference purposes, that puts our local links ahead of courses like Torrey Pines and Erin Hills.

Golf Magazine, a respected national publication all about golf, recently asked the writers of their regular feature, “Tour Confidential,” to name the best public course they’d played in the last year.  Sean Zak, senior editor at Golf.com named Greywalls as his course of choice calling it “fantastic” and “one of a kind.”  That’s a list of one. 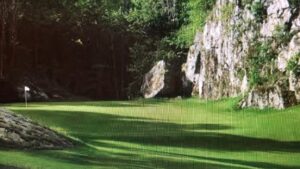 “Courses you can play” basically means those that aren’t exclusively private.  MGC is a semi-private facility, which means you can play limited rounds if you’re not a member.  So Greywalls, and MGC’s original Heritage course, qualify as courses you can play.  How you play is up to you.

A previous Word on the Street post delved into the problem of the U.P. being left off of too many maps of the U.S.  And as it turns out, most representations of Michigan are wrong anyway.  Here’s Michigan… border to border. 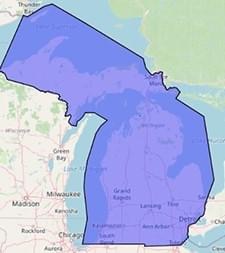