No matter your station in life, regardless of how much money you make, or what kind of mansion or hovel you inhabit… somebody has to take out the trash.  It’s just a fact.  And now it’s in the news, as the city of Marquette weighs the pros and cons of the current options in waste management.

It seems we’ve been offered some free recycling carts.  We’re talking about those big, green, 64-gallon jobs.  The ones that sit quietly by the side of the house until garbage night, when they’re rolled to the curb, where they’ll be loudly relieved of their refuse for another week.

Apparently, wheeled carts represent the new preferred system in the recycling community.  And with the exception of one commissioner, it’s the system our city leaders want for all Marquette households.  The proposed program addresses just recycling and not trash collection, which seems a little disjointed.  The thought here is that this will probably be a two-step process.  First, the recycling carts, and then, for some presumably good reason, trash collection will be carts only, too. 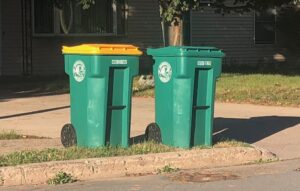 It was about three years ago when Marquette’s public works department, in conjunction with Waste Management, introduced the carts, with the option for households to use them, for a nominal monthly fee, or continue with the bag & bin system that’s been around for years.

If the new plan is adopted for the city, grant money from the state and other recycling interests will pay for each residence to get one cart… for recycling only, with no monthly fees.  Homes that currently use a recycling cart will no longer be charged for that service.

So, what’s the problem?  Well, for one, it’s probably a bad time to institute what’s being called a “mandate.”  Mandates have kind of a bad rap these days, so, with that, and other factors, the mandatory cart idea may face some vocal opposition.

Currently, just 40% of households use the cart system, which means 60% have chosen to stick with what they’ve been doing for a few decades.  There must be a reason for that.  Anecdotally, we would suggest that people don’t like having to deal with the big carts… hauling them around, finding a place to store them, their unsightly presence in driveways, etc.  They work better for some… not so well for others.

Not to mention that the greater capacity seems particularly unnecessary for households that put out only one bag and one bin per week, if that. 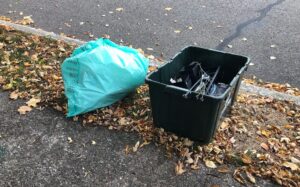 To be fair, advocates for the cart system have legitimate reasons to support city-wide implementation. Lynn Morgan, a public relations manager for Waste Management, indicates that, as haulers, they prefer the carts.  “They’re convenient for residents, help prevent litter, and most of all they’re safer for our drivers.  We see fewer injuries because our drivers don’t have to lift and throw bags by hand or navigate icy surfaces.”

The driving force behind the cart program is the ongoing effort to increase recycling.  Brad Austin, who heads up the county’s solid waste program, says recycling has seen improvement with the carts.  “Participation has increased significantly in the county, which has led to a 50% increase in residential volume received at our facility.  Communities who have launched curbside cart programs have seen the most impact volume wise.”

It’s hard to argue with such documented benefits.  But we will.

Fred Stonehouse, the one commissioner voting against the mandate, reasons, “If people wish to use the recycle bins and the city can provide them at no charge it is certainly not a bad thing.  But there is no reason to force other people to have to use a city provided bin when a privately provided one works just as well and better fits individual need.”

Agreeing with Stonehouse, and possibly as many as 3 out of 5 residents, we say it’s fine to offer free carts, as long as the option for bags and bins is still on the table.  They say you can never make everybody happy, but that could come close. 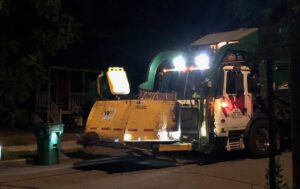 If you have a strong opinion on this, you might want to reach out to a commissioner.  This seems to be the kind of issue that calls for a little more public engagement.  The commission can continue to handle the complicated stuff, but if we’re talking trash, power to the people!

Finally, while we’re on the subject, it’s reassuring to know that, after some previous missteps in managing it, glass is now being handled more efficiently at the solid waste facility.  Says Austin, “We are processing it here and creating a sand and aggregate product.   We’re working with MTU and exploring the feasibility of glass in the concrete and asphalt industry.  Very cool project that we are proud to be a part of.”  Can’t argue with that.

Superior Culture in the Hood

As referred to here in an earlier post, there was a public hearing at the city’s Planning Commission meeting Tuesday night to “consider the possible revocation of the Special Land Use Permit for Outdoor Entertainment and Community Events as a Principal Use” previously granted to Superior Culture, a boutique entertainment and craft beverage destination at 717 North Third.

While all the official city documentation is pretty wordy, it boils down to this… according to a number of people living in the immediate vicinity of the popular hangout, the folks at Superior Culture are either not adhering to the conditions outlined in the original permit, or the conditions of that permit need to be reconsidered.  In other words, they’re too loud… too late… too often.

It was standing room only at the meeting.   A number of nearby residents voiced their frustration with the joint’s goings-on, citing noise and lights that make it almost impossible to enjoy their own backyards, on our precious and few summer nights.

On the other side of the aisle, Superior Culture’s following was well represented by a growing sect of the local alternative arts community, as well as those with a taste for their taproom staple… kombucha.  Superior Culture owner Alex Rowland seemed appropriately humbled by the proceedings and willing to do what it takes to keep the spirited venue a part of the vibrant North Third Street scene. 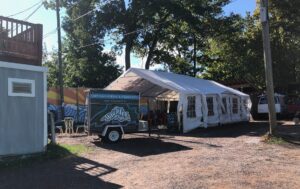 The Planning Commission had the option to be the party-poopers and revoke the special use permit… meaning no more outdoor fun for the culturists, or, craft some sort of compromise that might work for all concerned.  Considering that there was general acknowledgment that Superior Culture had indeed failed to live up to a few of  the requirements included in the original permit, it was well within the commission’s purview to pull the plug on their backyard bands.

But, citing Marquette’s master plan, which specifically charges the city with advocacy of the arts, the commission stayed the outdoor entertainment’s execution, based on Superior Culture developing a “sound-management plan,” to be reevaluated next April.  Though there was some resistance among the commissioners, City Planner Dave Stensaas suggests that the outdoor music venue can be revived, provided Superior Culture “demonstrates a commitment to significantly reduce the frequency and intensity of louder performances on the outdoor stage more compatible with the surrounding residential neighbors.”

We’ve been down this road before, when Blackrocks brought music outside.  But with some compassion and creativity, it seems those issues were adequately addressed.  We’ll go down this road again, possibly as soon as a Third Street Marketplace tenant follows the trend and puts the wheels in motion for outdoor entertainment there.

A Robert Frost poem includes the phrase…  “good fences make good neighbors.”  Well, with a push from the pandemic, we’ve moved the party outside, into the neighbors’ hood.  Now it’s a new day, and we’ll get a chance to see if the old poem was right.