REMEMBER THAT DAY  back in 1985 when NMU went big-time with the opening of an official Olympic training center?  Northern joined the likes of Lake Placid and Colorado Springs as the only communities in the country with a designated United States Olympic Committee training site.  We were finally on the map!  Kind of.

It seems that just being on a map doesn’t mean you’re automatically easy to find, or in this case… get to.

The story goes that when one of the USOC big-wigs flew into town to check out the new facility, she stepped off the plane and declared… “We’ve got a problem.”

The “problem” had something to do with the challenge of getting to Marquette, from anywhere.  Frequent flyers knew of what she spoke.  Though there are certain advantages to living in a remote area, there are also drawbacks.  Like… getting here.

And as you may know, things aren’t much better today.  You’ve no doubt heard that the two airlines flying out of Sawyer have cut their flights down to the bare minimum.  Delta flies once a day to Detroit and American once a day to Chicago.

The problem… at least one of the problems, is that those flights often don’t leave Sawyer until too late in the day to catch connecting flights from Metro or O’Hare to your next destination.  So, you get to spend your first night in an airport hotel instead of where you actually want to be.

If that’s not enough, the airlines are free to change the time of your anticipated departure, regardless of when you confirmed your flight.  So your initial travel plans, with other reservations already in place, are literally up in the air.

What can be done?  Local leaders have found… not much.

That doesn’t mean they’ve given up.  The Lake Superior Community Partnership, the organization seemingly best suited to lead any concerted effort, is doing just that.  According to new Executive Director Christopher Germain, “The LSCP is working alongside partner organizations such as InvestUP to understand what options we have, but since the problem is really a pilot shortage and it takes time to train pilots, options are limited.”

Marty Fittante of InvestUP shares Germain’s frustration as well as his determination to do whatever we can to mitigate the situation.  “We’ve talked to the airlines, different consultants, lobbyists, state officials and the Governor, who we urged to start to think of air service (at least in rural communities like ours) not simply as a transportation issue but as an economic development issue as well, and bring the state’s resources to bear on a solution through that lens.”

He also suggests a greater reliance on e-communication as a short-term solution.  “One opportunity is better deployment of broadband as so much can be done virtually now.  But that is by no means an ideal solution as so much of business needs to be done in person.”

There’s a rumor afloat that the airlines are looking to restore a couple of flights sometime in the near future, but information is hard to confirm with those guys.  “I’m not sure what “near future” looks like,” says Fittante, “but yes, I am optimistic – from conversations with Delta and some industry experts, I do believe this challenge is rooted in real part in a global shortage of regional pilots.”

As with other things, understanding the problem is the first step in solving it.  But a pilot shortage is something a little out of our control.  NMU has found success with its truck driver school.  Maybe they could start training pilots! 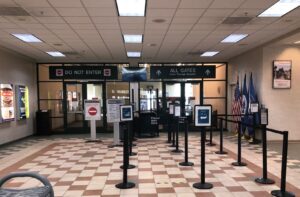 This situation may have been imminent, but Covid stoked it, and then the related pilot shortage, as well as other economic factors, have made it an unfortunate reality.  Germain sums it up… “I think it is important to keep in mind this reduction in service is only intended to be temporary and is entirely outside of the control of the airport. Sawyer remains a critically important asset to the region and I have confidence that when pilot staffing levels improve, the flights will return.”

Fortunately, our burgeoning tourism industry is less affected than the business community since many of our visitors drive here.  But if we’re concerned about image, which we are, the idea that airlines don’t find the need to provide better service doesn’t look good on our résumé.

Until more pilots are available and the airlines see the profitability of adding flights in and out of Sawyer, we’ll just have to cope.

While you’re trying to figure out your travel plans, remember this.  If there weren’t challenges like this to life in the Upper Peninsula, anybody could do it.