TV6 Changes and the end of the News in Munising

TV6 announced last evening that after 30 years in the news department, Greg Trick is retiring.  His last newscast will be May 7th.

Except for a brief stint as the morning news anchor a couple years ago, Trick has been the face of the TV6 News Tonight and TV6 Late News.  He always looked good, sounded good, and came across as a reporter you could trust.  Solid career.

He says he’d like to do some traveling, but he’ll also continue to help out at the Rice Paddy, working for wife Aoy.

He’s served under three news directors… Ed Kearney, Brian Cabell, and Steve Asplund.  “They’re among the best in the business.  I never stopped learning from them.”

According to TV6 General Manager Rick Rhoades, Trick has been valuable for more than just on-air duties.  “He is one of the leaders in our newsroom and is someone the younger staff members look up to.”

So Trick is the first mic to drop from a veteran lineup that now leaves long-timers Steve Asplund, Karl Bohnak, and Mike Ludlum.  All with more than 30 years in front of the camera.

With their career ambitions accomplished, you’d think one of those guys is ready to make a move… and you might be right.

Word on the street suggests that longtime anchor and current news director Steve Asplund is looking at surrendering both gigs, possibly within the year.  Asplund has been the anchor of the station’s highly-rated flagship newscasts since… well, a long time ago.  He likely won’t retire altogether.  He’s a news junkie and that’s a tough habit to quit.  He can call on his decades of experience in the market to contribute content in other ways.  He’s sure to have some kind emeritus status as long as he wants it. 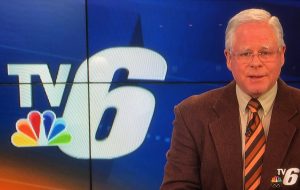 Among the Big Four, that leaves Karl Bohnak and Mike Ludlum.  No word on any changes with these two, but it’s probably crossed their minds.

Bohnak has been there forever and seems to have plenty of other interests, so he might be getting ready to bolt.

Ludlum has to consider it every time he’s on the road for two hours, in a snowstorm, so he can show us 15 seconds of a JV volleyball match.  (Hold your emails, v-ball fans.)

And we have to point out that the number of years these guys have logged together is extremely rare in the local TV biz.  Heck, it’s extremely rare in any biz!  Must have something to do with this place being Someplace Special, huh?

So with Trick’s departure, the game of musical chairs begins.  Who takes his place?  And will that open a slot somewhere else?

Andrew LaCombe’s name has been mentioned as a possible successor to Asplund in charge of the news department. LaCombe is known to be very engaged in the community and with that, he’s become a comfortable on-air personality.  We’ll see how all that would translate into being the boss.  If he gets to apprentice under Asplund for a while, all the better.

Sarah Blakely has filled in quite nicely since the departure of the popular Sophie Erber.  We’ll see who, if anybody, partners up with her on the big show when Asplund leaves.

Plenty to speculate about.  It’ll be interesting to watch it play out.  Film at 11.

The owner of the Munising News and Alger County Shopper has decided to cease operations at the end of this month.

Willie Peterson, owner and publisher, confirmed with Word on the Street that he is indeed concluding the run of both publications.  And quite a run it’s been.  The Munising News has been the paper of record in Alger County since ’96.  That’s 1896.

It’s not that business isn’t good.  According to Peterson, finding and retaining employees has been the biggest challenge.  And you can only ask one person to do the work of three for so long.

Peterson has had the property for sale for some time, but is yet to find a buyer.  It could still happen.  After all, Munising isn’t a bad place to invest these days.  Have you tried to find a parking place there lately?

Peterson purchased the paper after a long run as an ad rep at Marquette’s Mining Journal.  An advocate for all things local, Peterson would probably like to see the paper, in some form, continue to promote the area.  Just with somebody else at the helm. 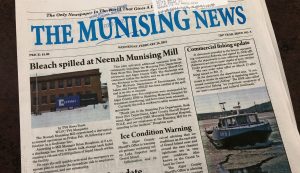 Regular readers will certainly miss the small town mix of area happenings, obituaries, and the occasional crime.  Store owners will be impacted by the void as well.

Kathy Reynolds of the Alger County Chamber and the Munising DDA confirms that the business community will miss the paper. “Not having that publication locally will make it challenging for some businesses and local governments to either advertise or post required notices. We will miss Willie and his staff.”

Nancy Dwyer, owner of the Falling Rock Café & Bookstore echoes a similar sentiment.  “Customers at the cafe have always eagerly awaited for Wednesday mornings so they can purchase their copy. We are surely sad to see it end its run, but we understand the market is changing.”

The Mining Journal will likely assume some of the information load the News currently handles, although that won’t salve the sting of losing a local institution. The News will join the thousands of newspapers across the country that have shut down in the last few years.  And Munising will join those same communities without a paper.  Progress isn’t always pretty.

4-wheelers/ORVs and motorbikes race on a 1/4-mile ice track with racers of all ages.

$5 donation per carload for spectators.

If you have an upcoming weekend event that you’d like to see mentioned here, send your info to doug@wotsmqt.com