It looks like the Karl Bohnak resignation/firing was just the tip of the vaccination needle.  Watching the regular news programs last night on both TV6 and Fox UP, we didn’t see any sign of popular anchors Sarah Blakely or Elyse Chengery.

Since corporate policy is to not comment on personnel matters, and with no word yet from either Blakely or Chengery, we’re left to speculate about their absence.  And here it is… like Bohnak, it may be that they have also refused the Covid-19 vaccination required to satisfy the Gray Television mandate that all employees must get the shot, or, hit the road.  If that explains their absence, we’ve got a full-blown epidemic in progress, right across the street from the county health department.  So near, yet so far.

About as quickly as you can say, “That’s what Karl says,”  TV6/Fox UP has lost a long-time weatherman and two very capable news anchors, not to mention the recent, quiet departure of homey Shawn Householder.  The Fox UP news last night was handled by the venerable Steve Asplund while the TV6 anchor desk featured Kendall Bunch.  We rarely, if ever, see Asplund on Fox UP and Bunch is typically the weekend news anchor on TV6.  So, with the “breaking news” of three key departures in less than a week, neophyte news director Andrew LaCombe has a little more to worry about than how reporters pronounce “Houghton.” 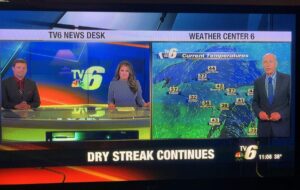 Again, station owner Gray Television has been unwavering in their insistence that all employees, regardless of their audience appeal, get the vaccination or they will be terminated.  This follows somewhat closely with the latest orders coming out of Washington.  Closely, in that those rules say that companies with more than 100 employees must have company-wide vaccinations, or… and this is an important or, weekly testing.

Apparently Gray Television has decided that the weekly testing option, for whatever reason, isn’t the way they want to go.  And that’s understandable.  Weekly testing can be expensive, and who pays for that?  Plus, if an employee tests positive, then what?  Quarantine everyone they’ve been in contact with?  Crank up the Zoom, because that’s how we’d be getting our news.

Will the departures of key employees cause Gray and TV6/Fox UP to reconsider their exacting mandate?  And when would a business decision override the legitimate concern for the health of your employees?  The guess here is… never.

The protest that took place Sunday out in front of the TV6 studios, organized by Stand Up Michigan, came and went likely without much impact.  Did they want TV6 to welcome Karl back?  (Not gonna happen.)  Or did they just want to call attention to what they consider unfair workplace rules?  (Gray is headquartered in Atlanta, not in Negaunee Township.)  And now, with the expanding exodus, how will they, and other dissatisfied viewers, express their frustration?

Sunday’s Stand Up for Michigan protest at TV6

If the concern of protesters is solely for the well-being of the duly departed, then they can probably turn the burners down a bit.  Bohnak, as we stated in last Friday’s Word on the Street, was likely considering retirement anyway;  rumor is that Blakely already has a new gig lined up;  the talented Chengery shouldn’t have any problem finding work;  and apparently Householder has landed on his feet somewhere out east.

A quick programming search of TV6 found only one soap opera… “Days of our Lives.”  If it weren’t a matter of career consequence and actual life and death, the ongoing saga of corporate mandates and unexpected exits could be good fodder for another lifetime drama.  Call it… “News at 11?”