Just when we thought we had our weekly Word on the Street post ready to go, with relevant and timely articles, new s–t hit the fan.  And though that phrase isn’t the most delicate, it’s quite appropriate in this case, cuz this is a messy one.

As you surely know by now, long-time TV6 weatherman Karl Bohnak is no longer employed at the area’s flagship television station.  Bohnak leaving TV6 would, on its own merit, be a fairly big story.  Even though, as we reported earlier this year, retirement was likely in his near future, anytime a beloved reporter who’s been the face of the local weather for more than thirty years decides it’s time to move on, it’s a story.  But as we now know… there’s a lot more to this one.

On Wednesday, Bohnak posted on his own Facebook page the details of his departure, and unlike Karl, the fan blades are now working overtime.

Here’s the skinny… TV6 is owned by Gray Television of Atlanta, and Gray’s policy, company-wide, is that employees must be vaccinated, or they’re gone.  A visit to the Gray website finds a heartfelt message from the CEO honoring the Gray employees who have succumbed to the disease.  You’ll also find the Gray policy clearly stating the vaccination policy that applies to all employees, regardless of their popularity and tenure.

Bohnak, for reasons understood only by like-minded anti-vaxxers, explains that he won’t put something in his body that isn’t guaranteed by the manufacturer… like brakes on your car, and that the survival rate from COVID-19 is well over ninety-nine percent.  He also alludes to government and corporate overreach, the loss of liberty, censorship, and a collapse of our way of life.

Whether he quit or was fired is a matter of semantics and may only be important in legal or financial matters.  To the viewer… he’s gone, in a fashion somewhat un-Karl-like to his legion of fans.  And now the passionate tribes are beating the drums, both for and against.  Thousands of social media comments on a number of Facebook pages, including Karl’s, expand, but don’t elevate, the story.  Social media has turned out to be great for getting reacquainted with old classmates, but it’s a rabbit hole for issues steeped in policies, politics, and anything that has to do with personal freedoms.

With the Bohnak news, we have to wonder… are there more vax-related departures on the horizon?  And how will new news director Andrew LaCombe, recent recipient of the Michigan Association of Broadcasters’  “Young Professional Broadcaster” award, deal with the loss of an icon, as well as a potential rash of openings?  As they say… stay tuned.

Finally, here’s our take on the Bohnak exit…  Gray has a policy regarding employment with the company.  Karl Bohnak decided he didn’t want to adhere to the policy, so he’s been relieved of his duties.  Someone will take his place.  And the weather will continue to be as unpredictable as it’s ever been.  End of story.

The Lions on TV

Continuing with this week’s TV6/Fox UP theme… Lions fans may still be vacuuming up potato chips after last Sunday’s telecast switcheroo, surely courtesy of a Packer-backer control board operator.

To refresh your memory, the Lions were the 1 o’clock game on Fox UP with the Packers scheduled for the 4 o’clock slot.  The Packer game was designated by Fox UP as their “game of the week” and thereby would be given preference if and when the two games would overlap, which they did. The Fox Sports mandate was that the Packers vs Saints had to be taken from kickoff.

And that’s what had Lions fans in an upROAR.  Most football fans would agree that the final one minute of a close game is more important than the first minute of another game, regardless of your rooting interests. Not to mention, we’ve invested three hours into this thing.  We’d like to see how it ends.  Unfortunately, mandates don’t always include things like common sense. 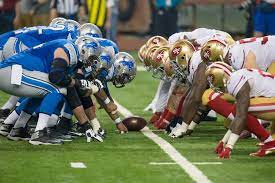 The Lions, perennial losers and league doormats, were actually threatening to tie a game that had been, just minutes earlier, seemingly out of hand.  With the game still in doubt, the TV screen suddenly, and without explanation, went to a commercial break.  Certainly an operator error, soon to be fixed, with a return to the conclusion of the Lions vs the 49’ers, right?  Nope.  Fox UP had no choice but to dump out of the Lions’ game and be there for the Packers’ kickoff. Which, by the way, was kicked through the end zone for a touchback.  Yay.

Frustrating?  You bet.  But entirely out of the hands of that aforementioned operator since Fox UP had designated the Packers as their “primary” team for NFL coverage.  And who could blame them?  According to Fox UP Vice President and General Manager Rick Rhoades, it’s a “business decision,” and it’s hard to argue with that.  The Lions probably have a smaller fan base in the Fox UP viewing area, not to mention they usually suck.  And the Packers?  Multiple championships, Hall of Fame quarterbacks, a nice stadium just down the road… connecting those dots is easier than Aaron Rodgers connecting with a no-name receiver for another 4th quarter comeback.

To our fellow long-suffering Lions’ fans, let’s just chalk it up to another in a long line of ignominious defeats.  (After a furious comeback, they did end up falling to the Niners.)  Nobody loses games like the Detroit Lions.  The only difference with this one was… we didn’t have to see it.

In our final TV6 story of the day, there was another Facebook dustup when it was reported by TV6 news guy Nick Friend that history students at MSHS  “placed 2,996 flags honoring the lives lost on September 11.”  And what could possibly be wrong about that?  It’s a nice, annual gesture orchestrated by history teachers Aaron Lancour and Kris O’Connor.  “The intent was to provide a deeper understanding of the lives lost, by providing a physical representation and memorial for each American who lost their lives on 9/11.”

The problem?  That number, 2,996, includes the number of terrorists who also lost their lives.  Well… plug in the fan because, once again, the social media world went ballistic. Without citing every objection, we’ll summarize… “How could you possibly honor the terrorists?”

Bottom line… they didn’t honor the terrorists.  It was an innocent miscommunication between a teacher and a reporter, corrected as soon as it was discovered.  The actual number of flags placed was 2,605, representing the number of U.S. citizens who perished that day. 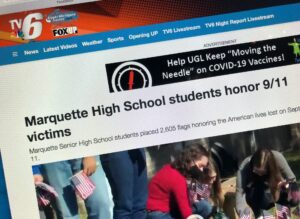 High School principal Jon Young explains, “The Never Forget Project is a strong example of how our teachers connect student learning about historical events to civic engagement projects that better their community today.”

Those who were on the receiving end of the arrows slung following the story… teachers Lancour and O’Connor, and even reporter Nick Friend, deserve a little consideration for doing jobs more thankless than thanked-for.  Hopefully they sleep more soundly than those slinging the arrows.