Updates… The Mural • A Festival • Cars & Cash • The Old Depot

Albert Einstein once said, “Creativity is contagious, pass it on.”

It was just three weeks ago when we reported on the progress of the very public mural being painted on the side of the BeWell building on the Ohio Street corner of North Third.  Well, Wednesday night marked the unveiling of the finished product, and though only one word is included in the work, this picture definitely paints a thousand of them… with plenty of creativity.

Natural is the creation of muralist Mia Tavonatti and her talented team of scaffold-scaling artists. Building owner Kate Lewandowski speaks for many of us when she says, “It was an honor to witness the collaborative effort required to bring this to fruition. It is definitely a community project and community asset.”

There’s a particular responsibility assigned to and assumed by anyone taking on such a prominent project.  We can choose whether or not to visit an art gallery or attend a concert, but a mural is right there, bigger than life, impossible to ignore.  So, we put our trust in the muralist to respect our sensibilities and not subject us to something even a mother couldn’t love.  Like bad busking, a bad mural can trigger our best avoidance behavior. 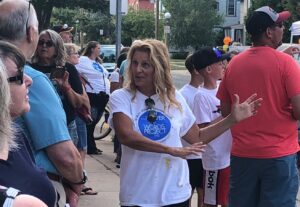 Muralist Mia Tavonatti at the unveiling of Natural

Tavonatti, with a number of murals to her credit, appears to understand what’s a stake when you lay out your vision and talent for all to see.  This mural, its content and creativity, doesn’t just respect our time and space… it elevates it, with artistic and social relevance.  And maybe, as Einstein suggests, it creates a contagion and inspires more artists to share their ambitions with the world.

Another smart guy, Michelangelo, said, “An artist must have his measuring tools not in the hand, but in the eye.”  Not that Mike’s take needs validation, but Natural provides it, nonetheless.  Thank you, Mia.

After a year off, HarborFest is back, in Mattson Park, this weekend.  You already know about it?  Hopefully you do, and you’re planning on going down to support the Marquette West Rotary and all the musicians, vendors, and volunteers pitching in for the cause.

And what cause is that exactly?  Well… Marquette West Rotary counts on HarborFest to restock its bank of bucks destined to be reinvested in the community, through grants given to selected non-profits.  It’s the service club’s only big fundraiser, and missing last year’s edition left some space in that bank. 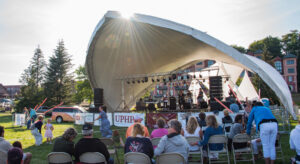 Co-chairpersons Pam Christensen and Bryan Lopac hope area festival-goers are ready for the return of HarborFest.  Says Christensen, “It’s free admission! So, while people enjoy the music, they can also check out a great selection of food and drink… and support Rotary.”

Service clubs have struggled with membership in recent years, but Christensen sees that changing.  “We’ve discovered a lot of young people who are interested in getting involved in clubs like ours.  They want to give back and service clubs are a great way to do that.”

A perfect day, a bunch of cool vehicles, and a generous car-loving crowd added up to a nice pot of classic cash for the Women’s Center.  According to event organizers Tammy and Bill Dupras, when the final tally comes in, somewhere north of 15 thousand bucks will have been raised.

Between Third Base Bar tip money, Silent Auction dollars, 50/50 tickets, and plain old donations, this year’s event was the most successful yet.  It looks like that Covid year off gave folks a chance to squirrel away some donation dollars, and it didn’t take long… like zero to sixty on one August Saturday, for the giving to shift back into gear. 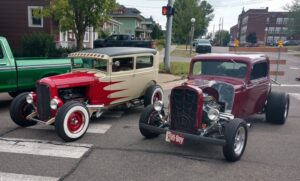 Though they go out of their way to thank sponsors, participants, and spectators, the Third Base Bar team of volunteers are the ones who should be thanked.  Any idea where you could find them?

It wasn’t that long ago that a local attorney had a plan to put a jazz bar in the old train depot which sits just off West Washington on South 5th Street.  The deal fell through presumably due to complications that made the project untenable.

But now the idea, or one like it, has new life.  According to real estate agent Stephanie Jones, who handled the purchase of the property, we’re in for another great option in the food and drink scene.  “Look forward to a dynamic new entertainment beer garden & food truck venue next year.” 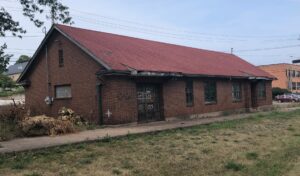 Though it’s still very early in the process and details are scant, new owner David Meikle says they’re “very excited to be coming to Marquette.”  And who are “they.”  Well, they are a couple guys with similar facilities in the northern lower peninsula including The Back Lot Petoskey and The Back Lot Charlevoix.  And soon, barring any of the aforementioned complications, The Back Lot Marquette.

Whether we need another bar or not is up for debate.  But to see an old, historic building rehabbed rather than razed is heartening.  Meanwhile, the list of local structures deemed unworthy of 21st century enterprise and sentenced to the scrap heap has been heart-breaking.

Good luck to The Back Lot boys.  And welcome to Marquette.