Wells Fargo Bank Building Up for Sale, and Polar Rollers Up for “Fun”

But Flagstar intends to stay

A PROMINENT DOWNTOWN building is up for sale.

Namely, the Wells Fargo Bank building, now occupied by Flagstar Bank, at the corner of Washington and Front Streets.

The listing is with Newmark Knight Frank, an international real estate and property management firm. Price provided only upon request.

The bank is also listed with LoopNet, an online marketplace for commercial property.

Daniel Canvasser of Newark Knight Frank says the building just went up for sale and Flagstar intends to stay in the building, even after the sale.

The bank was built back in 1927, an impressive edifice with 27,000 square feet of space. Anyone who’s banked there in the last several years would have to agree that the space has been underutilized, to say the least. 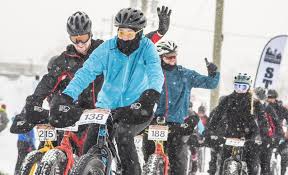 Plenty of competition in the cold

The UP 200, of course, along with the Midnight Run and the Jack Pine 30, are the headliners.

But there’s also the Polar Roll–the fat bike races, along with a snowshoeing race. They’ve become a pretty big deal on their own in the last few years.

They started in 2015 with little more than a handful of racers. Last year? 450. This year so far? 566 racers. And there’s still time to register.

The 15 mile bike race and the 30 mile snowshoe race start and end Saturday morning in Ishpeming, while the 30 mile race starts in Marquette and ends in Ishpeming. Anyone who’s ever ridden a normal bike under ideal conditions knows that the trek to Ishpeming is tough–mostly uphill. Well, try riding a fat-tired bike in the snow, slush, and ice all the way up to Ishpeming.

And wait a minute, did we say 30 miles in snowshoes? Seriously???

The 906 Adventure Club is sponsoring the races, and they’re throwing an After Party at Barrel & Beam Saturday evening. Some of of the slower racers and snowshoers may be arriving late. Or not at all.