NEW INFORMATION AS OF FRIDAY MORNING:

WZMQ-TV, also known as MeTV Marquette is the new home of CBS in our market.  This information was made available this morning on the WZMQ website.  Though the cable guide doesn’t yet reflect all these changes, they have apparently gone into effect immediately.

Also, in unconfirmed information, it is reported that CBS dropped WJMN, and not the other way around as initially reported by Word on the Street.  Until a spokesperson from WJMN reaches out to us, we’ll just be reporting what we’ve heard… the word on the street.

Earlier this evening WJMN-TV, Channel 3, announced that they will no longer carry CBS network programming.

The announcement on Facebook read like this:  “Starting on January 21, 2022, WJMN Local 3 will no longer be affiliated with CBS Network. This means CBS programs and sports are also moving.

“WJMN will remain on channel 3 and will continue to provide the news, weather, sports and entertainment that we have for over 50 years across the Upper Peninsula.”

Unless they have another network lined up, dropping CBS means they’ll be considered an “independent,” with a mix of programming they select from a variety of sources.  Their new schedule, beginning tomorrow, is available on their website. The programs they’ve plugged in to replace the CBS fare reflect a range of offerings that, at first glance, don’t look like they’ll draw any more viewers than the network programming did.  But that’s yet to be seen.

They plan to expand their local news coverage, so it looks like they think that’s the way to go.  There’s so much generic programming out there now, the only way a local station can establish an identity is through their news.

We’ve yet to hear from anyone from at WJMN, but viewership is likely just one of the factors involved in the decision.  Network affiliation comes with a lot of conditions, so at some point station execs have to decide if their declining popularity is worth it. 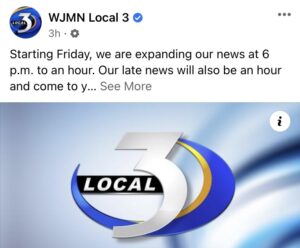 Bottom line… your soaps are gone, the network’s news presentations are gone, the morning fare… gone, and, yes… CBS Sports, gone.  There will be other ways to find it, but you aren’t gonna see Cincinnati at Tennessee on WJMN.

For cable subscribers the short term may be painful, but, speculating here, it’s likely that Spectrum will find a different CBS affiliate, like WFRV-TV out of Green Bay, to fill the void.  They’re owned by the same corporation that owns WJMN, so that plan might already be on deck.

We’ve seen network changes in this market before, but this is the first time a network affiliated station decided to go it alone.  The guess here is that it won’t have much impact on viewership other than what they get from their heightened emphasis on local news.

When we know more, we’ll share it here.  Until then, we’ll be watching.