Wordle • Who Are We? • The Hospital Property Cont. • Changes Downtown

Wordle on the Street

DID YOU PLAY today?   How’d you do?  Your Facebook friends are all waiting to see your results!  Those of us who don’t play have no idea what your colored boxes and scores mean, but you seem to be proud, so we’re happy for you.

Here’s an idea.  Instead of setting aside a few minutes every day to discover the hidden word, why don’t you take that time and try to invent your own word game?

Wordle, which was first introduced to the public just last October, was recently sold by its creator to the New York Times for “an undisclosed price in the low-seven figures.”

I don’t know about you, but I don’t think “low” should describe anything that has seven figures.  So, if you want a REAL challenge, use your wordsmith aptitude for something other than playing someone else’s game and create your own.  With a little luck, you’ll be cashing in by Christmas!

With all the regional and national attention our area has been getting lately, it’s interesting to note how other people see us.  Reporting and writing on an area you’re not very familiar with can make for some curious characterizations.

For example, a recent article in the Detroit Free Press about winter in Marquette might lead one to believe that surfing on Lake Superior in February is a common activity.  For sure… it happens.  We’ve probably all seen the photos of the hearty souls, with their iced-up beards, riding the big lake’s whitecaps. 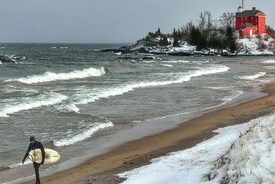 Locals know that those guys are the exception.  Winter surfing in Marquette is one of those “extreme” sports, with an undoubtedly limited appeal.

But, in getting a glimpse into a day in the life of Blackrocks owner David Manson, Free Press readers were led to believe that the Queen City becomes Surf City when the gales of November come early.

Yes, people surf in Marquette in the winter.  No, it does not embody the daily routine of most warm-blooded locals.  But, articles like that, in their attempt to create an interesting narrative, actually do the tourism industry a favor.  They portray Marquette as quirky, unconventional, and a must-see.  It’s all good!

And when folks visit in winter, if they want to hop on a board and surf Superior, they’re more than welcome.  Weather permitting.

At last Monday’s meeting, the Marquette City Commission approved a Memorandum of Understanding (MOU) with the NMU Foundation that necessarily puts the city’s support of the hospital property redevelopment on paper.  Though the MOU had already been reviewed and approval was a bit of a formality, commissioners still pressed the NMU Foundation’s representative for assurances that the best interests of the city will be addressed with the project.  The agreement doesn’t have actual authority, but rather just represents the “understanding.” 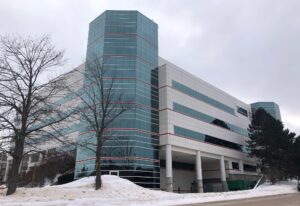 As we reported here a couple weeks ago, there is some concern among the citizenry that once the project is turned over to a developer, local aspirations will fall victim to the goal of profits over people, and the understanding will be an afterthought.  Although those concerns are legitimate, the Foundation has indicated a sincere effort to facilitate something that will benefit both the university AND the community.  Regardless of the respective concerns and assurances, it’s a project that will have considerable impact on the community and, with that, is worth keeping on our radar.

Commissioner Evan Bonsall has a practice of clarifying his commission votes in a regular blog which can be accessed through his website at evanbonsall.com.  If you’d like to hear his explanation of the project, and why he voted on the MOU as he did, you’d be well served to read his post.  It’s a thoughtful and detailed description of the proposal and what it can mean to the city.

A recent downtown closing has the rumor mill rolling, so, as a public service, we’ll keep it alive here.  Most of you are probably aware that the ovens are off at Little Caesars on the corner of 4th and West Washington.  There was no warning to customers, just a hand-scribbled sign in the window indicating that it’s closed… forever.  Well, it may not be forever because the building and business are apparently for sale for 1.5 million bucks. 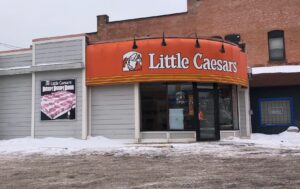 The rumor is that employees walked out, due to some kind of dissatisfaction with the workplace.  That could mean that they were stressed to the max because they were short-staffed, or… maybe it just wasn’t worth it anymore.  Who knows?  Confirmations are hard to come by, but we’ll keep our ear out for further details.  Anyway, if you’ve got the 1.5 million, you can make it your own.  It’s not hot, but it’s ready.

Down in the 100 block we’ve got the Kildare Irish Pub, which is… was, for sale.  We recently wrote here that it has a ton of potential with its prime location downtown.   It’s been through a few hands as a restaurant, with no long term success, but maybe just needs a fresh start with new ownership. 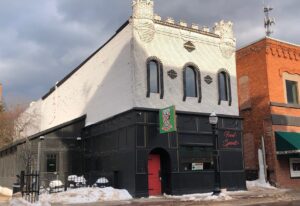 Well, word is that it has new owners… the new TV station in town, WZMQ.  The station bigs were here a couple weeks ago scoping out locations and apparently, they found what they were looking for.

Going with the Kildare building for their TV station is an interesting choice.  Will it be just for offices, or could they broadcast out of there too?  With today’s television equipment, you don’t need much space.  And, done right, that would be a cool look for the new guys on the block.   We haven’t been able to confirm the plans with corporate leadership, but we can probably assume corned beef won’t be on the menu.  And there probably won’t be a menu.

WMQT, also written about here recently, has been purchased by the Keweenaw Bay Indian Community.  It’s not their first foray into the broadcast world.  They also own other radio stations in the Upper Peninsula as well as a variety of other businesses… not just casinos.

According to Tom Mogush, President of Taconite Broadcasting, the selling party, both he and longtime on-air personality Jim Koski aren’t going anywhere.  “Jim Koski and I will be staying on with the KBIC to help in the continued growth of the stations, exploring many new opportunities.”