Say hello to “Revival,” the latest creation of Michele Dupras, the entrepreneurial designer who’s given us Revisions, the handcrafted home goods store just a block down the street from Revival.

She’s hoping for a soft launch of Revival by November 1st. Absolutely, she says, it’ll be open by Ladies Night on November 14th.

“If you’re invited to a wedding and you need a nice dress for it and you’re 25 to 65 years old, where do you go in town?” Dupras asks. That is her succinct rationale for her new shop.

She points out that there are great shops for sporting wear, for casual clothes, and  for hippie or vintage clothes, but nothing for higher end, classic women’s clothing. That will be Revival’s niche.

“What we’ll be offering is something your sophisticated, older sister would buy and wear,” she explains. “Designer clothes, but the prices won’t break the bank.”

But wait, there’s more. About half of the store will be devoted to upscale home furnishings and accessories. Kinda like Revisions but more classic stuff, a bit pricier. 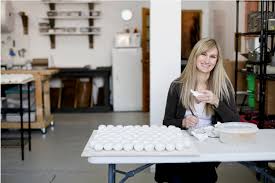 Dupras began her career strictly as a designer. Now she’s expanding her horizons.

Now, you might recall that Dupras recently bought an art gallery out near Presque Isle, which she’s turning into a design studio and a venue for classes as well as a retail outlet during the tourist season. So why oh why, as a mother of three young children, would she decide to open yet another shop?

“I like projects,” she says as she busily straightens up displays at Revisions. “I get bored.”

She had considered opening a Revisions-type shop in Traverse City but the logistics would have been too difficult. Too much time away from her family. Three shops in Marquette? That, she can handle.

Not only that but, “I live in Marquette, I want to raise my kids here,” she says. “I’m invested in this town. I want to make this an even cooler town than it already is.”

She will be leaving town this winter and spring, though–to attend industry shows in Atlanta, Chicago, and New York to find clothing and home goods that will be on display at Revival next year.