Yes… we have salamanders, and they’re on the move.  Apparently, over the winter, salamanders burrow deep underground to seek protection from the cold. In the spring they emerge to migrate back to wetlands to lay their eggs and reproduce.

And that’s what’s happening these days, or more specifically… nights, at Presque Isle.  But it’s not without peril.

It seems that a couple of years ago some local salamander whisperers noticed that the trek from the reptiles’ winter digs on Presque Isle’s interior to the nearby bog was turning into a death march.  Isle visitors… in cars, on bikes, even on foot, were unknowingly squishing the little buggers.

Eli Bieri, a Northern freshman at the time, was one of the first to identify the problem.  “I saw hundreds of salamanders being hit by cars. As somebody who is passionate about amphibians, I wanted to change that.” 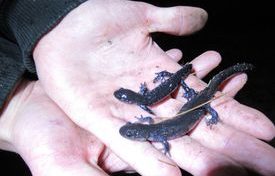 With the help of the Superior Watershed Partnership, Bieri and others convinced the city that something could, and should, be done.

So a portion of Peter White Drive on the west side of the island, where most of the migration takes place, is closed from 6pm to 6am from March 15th to April 15th.

Tyler Penrod, another of the intrepid salamander saviors, credits the protection program for saving countless salamanders. Though exact numbers are difficult to come up with, Penrod says the program has been a success.

In past years, as many as “400 salamanders were being killed by cars during their annual spring migration.  The effort was successful in lowering the number of human caused salamander fatalities to just 3 during the 2020 migration.”

“They are integral to our native ecosystem and contribute to biodiversity and the overall health of our northern forests.”

Dr. Leonard suggests that salamanders are similar to the canary in the coal mine.

This well-intentioned protection racket stands in stark contrast to the way we, the city of Marquette, handled the over-abundant deer population on Presque Isle back in 2001.

City officials, acting against the wishes of many vocal citizens, deferred to the management plan that dictated protection of the park’s vegetation, and went ahead with a “culling” of the herd.

Dozens of the popular white-tailed deer were lured to strategically placed bait piles and gunned down by mercenary sharp-shooters.  The weeds of Presque Isle were saved.

Granted, DNR regulations at the time complicated the city’s remediation efforts, but solving the “problem” with guns seemed to be a little too much of a trigger-happy response.

Fast-forward twenty years and we’re stopping traffic to save the salamanders.  And along with the northern lights, they’re this season’s “must-see.” 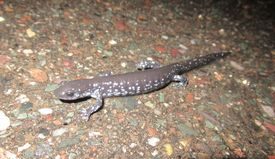 According to Penrod, “We’ve only seen them on the stretch of road between Moosewood and the Superior Watershed Partnership office. They’re typically on the move between 10pm and 4am on rainy nights in the mid 30’s.”

Rainy nights in the mid 30’s?  That’s spring in Marquette.  Though the park officially closes at 8pm, if you’re respectful, with no intent to disturb the peace, you can probably witness some migration without being rousted out.  But make sure you keep in mind the fragility of the slight salamanders and watch your step.

For those of you wondering if money from Lansing ever finds its way north, across the bridge, the answer is… yes.

That’s capital-speak for, here’s some money for some projects we think are valuable to your area… spend it wisely.

And for some reason, according to the information contained in the press release, preference was given to projects in Marquette County.  As a result, local entities received six of those twenty grants.

Here’s a thumbnail summary of who got what, and why:

City of Ishpeming – $100,000   This is for development along Malton Road to create an additional campground and to increase tourism to the region.  According to city manager Craig Cugini, this will help fill a void for rustic camping in the area.

“Our goal is to support some of the things that already make Ishpeming a great place to live and visit. This site will be located near a trailhead for RAMBA Bike Trails and Iron Ore Heritage Trails.”

City of Negaunee – $82,600   This will be dedicated to multiple upgrades to the Teal Lake Shoreline Beach Area.

City manager Nate Heffron explains their plans for the grant.  “The City is attempting to provide access to as many users as possible while retaining Teal Lake’s traditional quiet lake status.  Our future plan involves transitioning from a mining-based economy to a tourism-based economy and this project helps to facilitate part of this transition.” 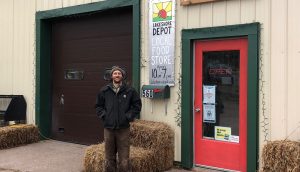 “The impact this will have for our business, is allowing us to operate at a level of increased efficiency and scale, which will help us sell more local products and contribute to the success of our local farmers and food processors.”

Travel Marquette – $20,800   This involves the integration of online and print tools to assist citizens and visitors with hearing, vision, and mobility limitations navigate the county.

According to Travel Marquette Executive Director Susan Estler, “The grant is based on a program of inclusion for those that may have a variety of accessibility issues. This is in line with the program Travel Michigan has for accessibility.”

Noquemanon Trail Network– $100,000   This money will go towards expansion of parking spaces, a vault toilet facility, and develop a mountain bike skills area for all ages and abilities at Marquette South Trails.

Northern Michigan University – $100,000   This will be to implement a self-contained growing center proposal that aims to enhance and expand a new indoor agriculture degree program at the university.

There will be some match money required for each grant to be awarded, but overall, this has to be considered a win-win for Marquette County.