Initially it was easy to write this off as another crazy idea that would burn out faster than a 4th of July sparkler.

A Spaceport in Marquette County?  On the Granot Loma property?   On the shore of Lake Superior?

But this morning the group of industrialists behind the plan has taken another big step for mankind as they announced the site selection for the project’s command center, the final piece to the high-tech puzzle.  The Command and Control Center will be placed in Chippewa County, a U.P. neighbor.

Working with a two million dollar grant from the state, the Michigan Aerospace Manufacturers Association (MAMA), which represents Michigan companies involved in the aeronautics industries, has been the driving force behind the promotion of the project.

The Spaceport’s primary mission would be to facilitate the launching of rockets designed to put small satellites into low earth orbit. The brave new world, just past Phil’s 550!

With the Oscoda-Wurtsmith Airport in lower Michigan designated as a horizontal launch site and Marquette County as a vertical launch site, today’s announcement concludes the site recommendation phase.

Next up would be the approval processes, many based on environmental impact reviews that will take months to execute, but are required prior to any site preparation.

So how did we get here… to having a rocket launch site on the way to Big Bay?

In May of 2019, the Marquette County Board approved a resolution in support of the project going forward… at Sawyer International Airport. The board hired a consulting firm, Explorer Solutions, to fact-find and advise.

Fast-forward to July of last year when the project was announced on the steps of the county courthouse.  It was celebrated at the time by association representatives, local officials, and everybody else excited about rockets.  We hadn’t seen enthusiasm for a happening like this since they let the moose loose up by Michigamme.

But suddenly, without much apparent public knowledge, the project had gone from the airport to Granot Loma.

While the Explorer Solutions report indicated that Sawyer could accommodate a horizontal launch site, it was not recommended as a vertical site.  The report suggested alternatives including shooting the rockets off a barge floating in the Marquette harbor, establishing a site at Little Presque Isle, and Granot Loma. That, of course, is the forested lakefront land better known, until now, for its ostentatious log home.  (We haven’t reached out to the property’s owner, but a source tells us he’s cooperating with MAMA as they explore the possibilities.)

Why the aerospace association is willing to put a horizontal site at the Oscoda airport but wants only a vertical site here is somewhat of a mystery.  Unless it’s cheaper, which seems unlikely, why go to the fuss of a vertical launch when we’ve got a perfectly good airport right down the road?

And whether or not the same people who supported the idea when it was destined for Sawyer are still on board with the new plan remains to be seen.  While adding a valuable asset to the Sawyer ledger, paid for by somebody else, was very appealing, the same can’t quite be said of the new proposed location.

If early signs are any indication, getting the approval of a skeptical area populace will prove to be much trickier than submitting soil studies and determining infrastructure requirements.

It appears that the opposition, fronted at this time by the Citizens for a Safe & Clean Lake Superior, is well-heeled, passionate, and ready for a fight.

In a recent Zoom presentation sponsored by the Upper Peninsula Environmental Coalition (UPEC), “Citizens” president Dennis Ferraro made it clear that the Michigan Launch Initiative’s plan to put a vertical launch site near the lake, and even nearer to their hearts, is a non-starter to their fervent membership.

“We want to let them know now that this isn’t going to work.  Their investors should know that they’re not going to come into Marquette County and Powell Township and run roughshod over the citizens here.”

Ferraro continued, “We’re going to tell them they’re in for a fight, and we’re hoping that once they get this message they’ll realize that their efforts to industrialize our lakeshore are futile.”

Ferraro sums up the position of the citizens group like this…  “A rocket launch site at Granot Loma would permanently change and damage the unique character of our Lake Superior coastline and impair the quality of life which we now enjoy, and which is creating sustainable growth by drawing more permanent residents and visitors to our beautiful surroundings.” 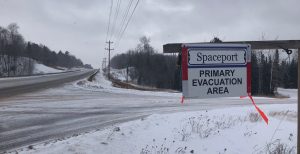 This sign at the corner of 550 and Eagle’s Nest Road has the look of a false flag.

An online survey garnered more than 21,000 signatures in opposition to the initiative.  Much like the fight that preceded the opening of the nickel mine just up the road, this one will be emotionally charged… no rocket fuel necessary.

Not unexpected, the influential Superior Watershed Partnership has encouraged Governor Whitmer to withdraw her support for the project.

“Given the challenges presented by both sides of this debate, are we ready to embrace a project that may or may not provide new jobs in the Marquette area and may or may not permanently endanger the natural habitat we all profess to value, but will certainly inconvenience long-time residents near the launch site and mean the loss of jobs down the road?”

The jobs in question are just that… in question.  Past experience instructs us to be wary of jobs promised, and this launch initiative is no different.  Job estimates are everywhere from four on-site to thousands statewide.  Likely somewhere in between.

Provided an appropriate site can be secured… Granot Loma or another, the Michigan Launch Initiative does have local support.

Sawyer Airport Director of Operations Duane DuRay thinks space aeronautics is the place to be.

“This would be putting us on the leading edge of an evolving industry that is moving forward.  It would be shortsighted to disregard the potential windfall related to this industry.”

While supporting the notion of the project, DuRay acknowledges the concerns of the opposition.  With some knowledge of the process, he’s confident that those concerns will be taken into consideration as plans move forward.

“If the extensive vetting of the project shows it would be detrimental to the area, then it won’t happen,” predicts DuRay.

If that’s the case, then MAMA can look for a qualified site somewhere else in Michigan and take their big toys with them.  Other areas might not be as dismissive.  A lot of folks are eager to welcome any kind of investment into their communities.

Estimates suggest that the Marquette launch site could conduct between 22 and 25 launches per year at full capacity, with each launch projected to generate revenue of $15 million, with potential annual earnings of $375 million.

Revenue and earnings?  Well that sounds good, as long as some of it stays here.

If and when the Granot Loma site is secured and passes muster with the regulators, MAMA and the Michigan Launch Initiative will still have to deal with fierce, impassioned public opinion.

Battle lines are being drawn.  Consider the countdown… on.