A COMPLAINT WE’RE always hearing: “There just aren’t enough doggone places in downtown Marquette where you can buy a beer!”

Well, we’ve got a new entrant in the beer-stakes. The Iron Bay Tap Room opened in a very soft launch this weekend. It’s right next to the Iron Bay Restaurant and Drinkery.

Twenty-four beers on tap, most of them from Michigan, though bar manager Heather Concha says she plans to regularly introduce new craft beers from across the nation for discriminating beer drinkers.

Limited snacks so far–just chips and nuts–but they’ll soon be offering a limited pub menu, and Concha says patrons are welcome to bring in food from the outside. Four big screen TV’s.

Just like the restaurant next door, the Tap Room is heavy on U.P. history. The bar and tables are constructed from grates taken from the Mackinac Bridge. 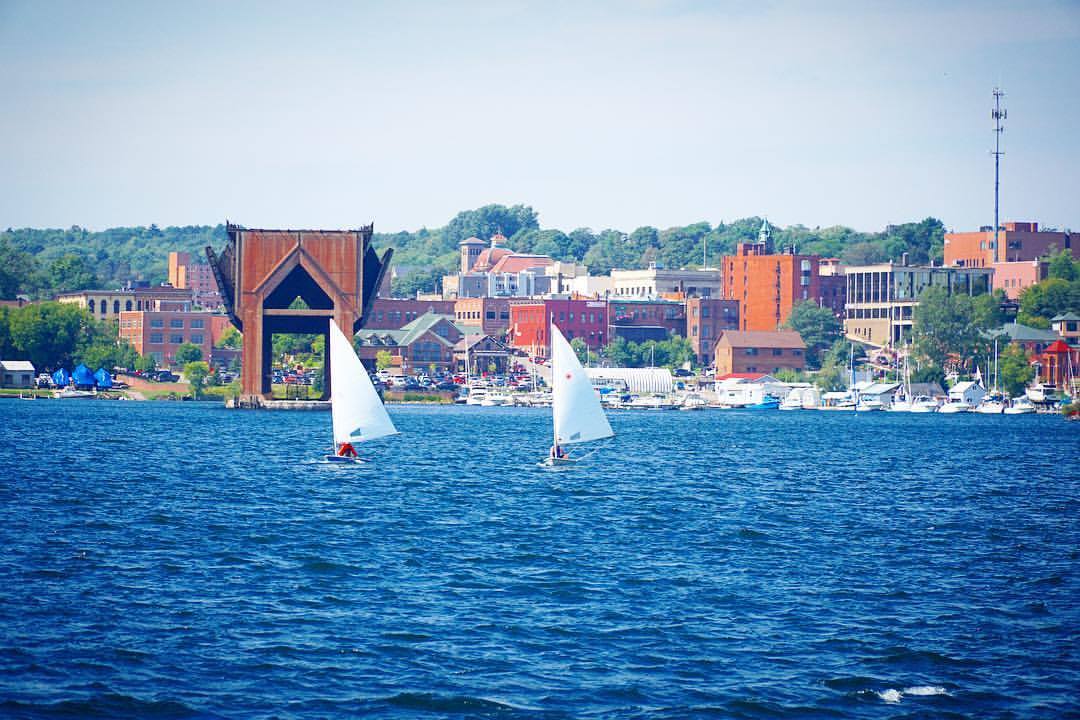 No hard numbers from TravelMarquette yet on hotel revenue countywide for July and August, but the totals through June look close to spectacular. June was up 16%, May was up 30%. For the year, the county’s up 22%. Keep in mind, most tourist cities would be pleased with a robust 5-10% yearly increase.

Judging from vehicle traffic, July and August should be way up, as well. 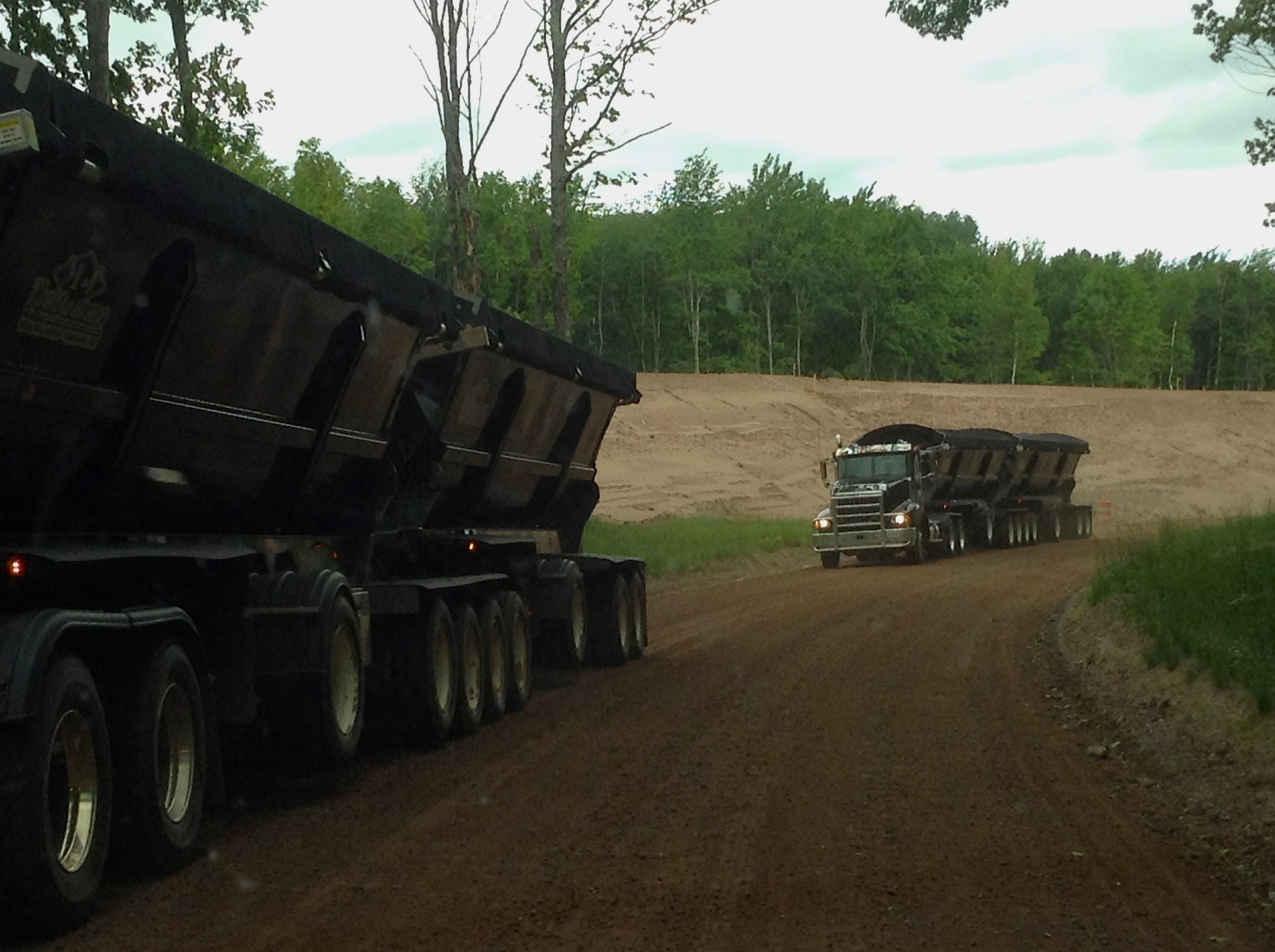 EVER SINCE THE Eagle Mine outside of Big Bay started operations three years ago, there’s been concern that the big trucks lugging ore across northern Marquette might cause accidents in congested parts of town. Serious accidents.

Police Chief Blake Rieboldt confirms there have been some accidents but no more, he says, than with any other trucks.

One such accident occurred two weeks ago at the intersection of Presque Isle and Wright Streets. The truck, heading south on Presque Isle, was attempting to turn right onto Wright, and in so doing, was veering to the left to allow for its wide turning radius.

It was flashing its right turn blinker.

Unfortunately, though, the car behind it apparently didn’t see the blinker, and pulled up alongside the truck on the right.

Crash. Major damage to the car. The motorist, according to the police, emerged with no serious injuries. And a citation for following too closely.

No citation for the truck driver, but a mess on the roadway. And further evidence, some say, that the trucks need to find an alternate route away from the city. 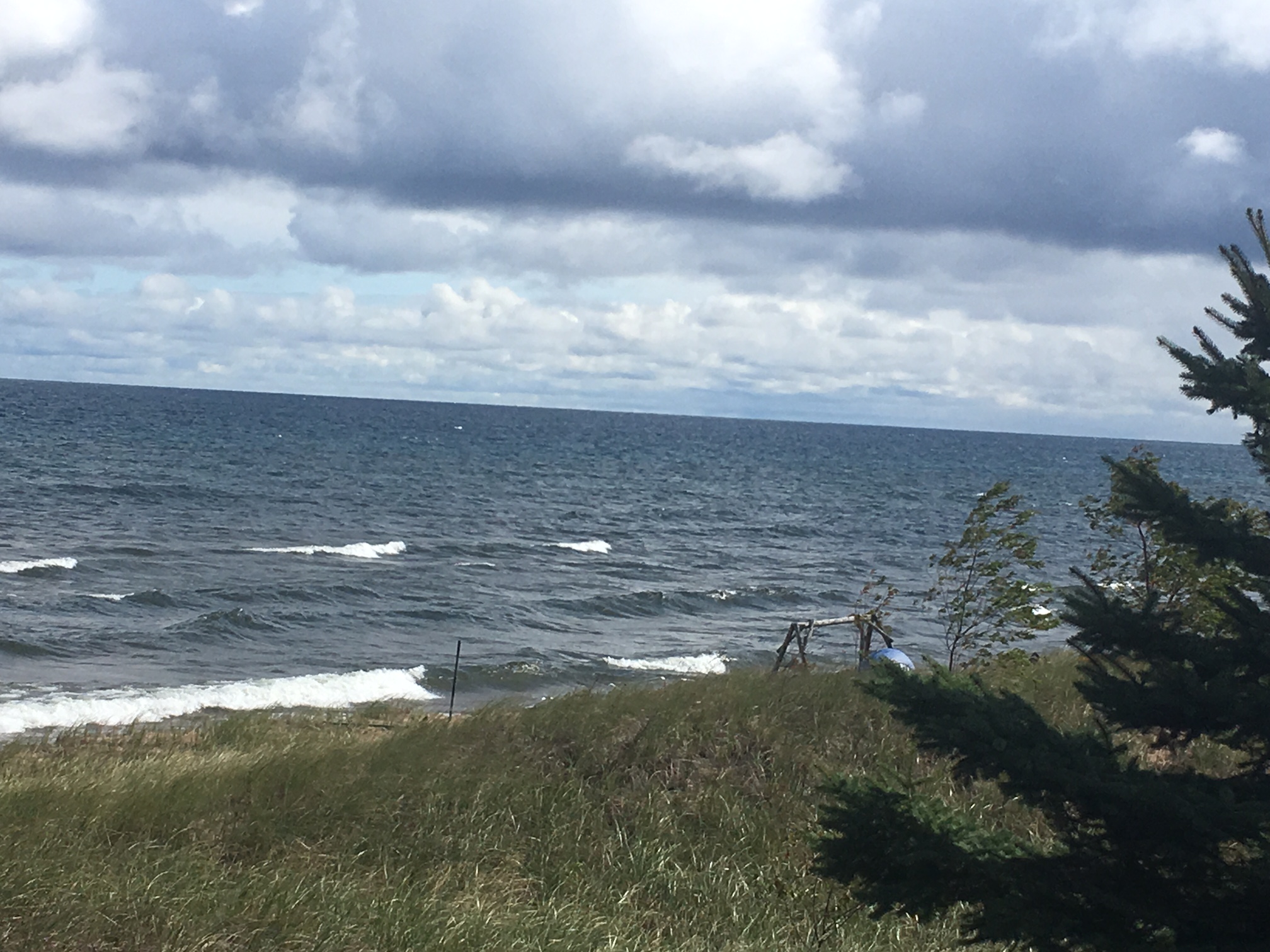 SO YOU’RE THINKING August was a pretty crappy month in the U.P., weatherwise.

That’s unusual for what’s been a reliably beautiful month in the past. But according to NWS meteorologist Jason Alumbaugh,  August was 4.4 degrees cooler than the average, with 1.5 more inches of rain. The numbers come from the Negaunee Township weather station.

“We never hit 90 degrees for the entire summer,” Alumbaugh adds. “And to be honest, we didn’t have many 80s, either.”

In fact, there were only two days above 80 in August….and three days when the high temperature never made it out of the 50s.

For crying out loud, what happened to summer? 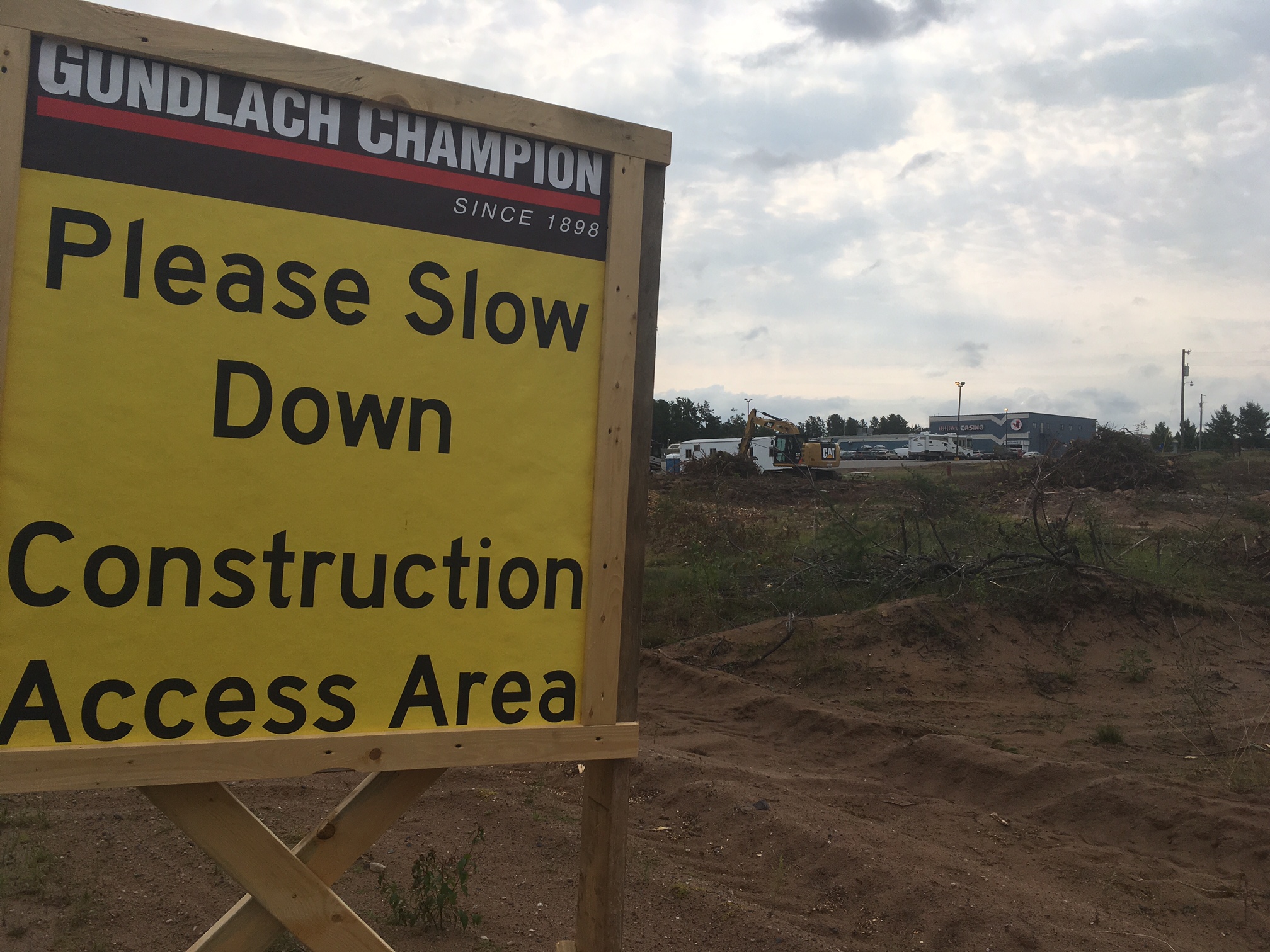 LAND-CLEARING IS well underway for the Ojibwa Casino expansion off of M-28 in Chocolay Township.

It’s a huge project–$36 million worth, a 76 room hotel, two restaurants, a 400 seat convention center, a 1200 seat entertainment venue, and a major expansion of the casino itself.

There’d been some concerns about the water supply needed for the expansion but three new wells drilled there recently look promising, according to Chocolay Township manager Steve Lawry. Good quality and pressure so far, with no adverse effects for surrounding residents.

Why’s the water so bad for residents near that stretch of M-28? Lawry says a study years ago revealed there was an underground swamp under Lake Kawbawgam that fouls up the water quality. Not much they can do about it.

But back to the casino project. It should be open by late 2018. It could be a game-changer for Chocolay, for better or worse. Maybe more development on the way.

And you have to wonder what kind of effect it’ll have on downtown Marquette. 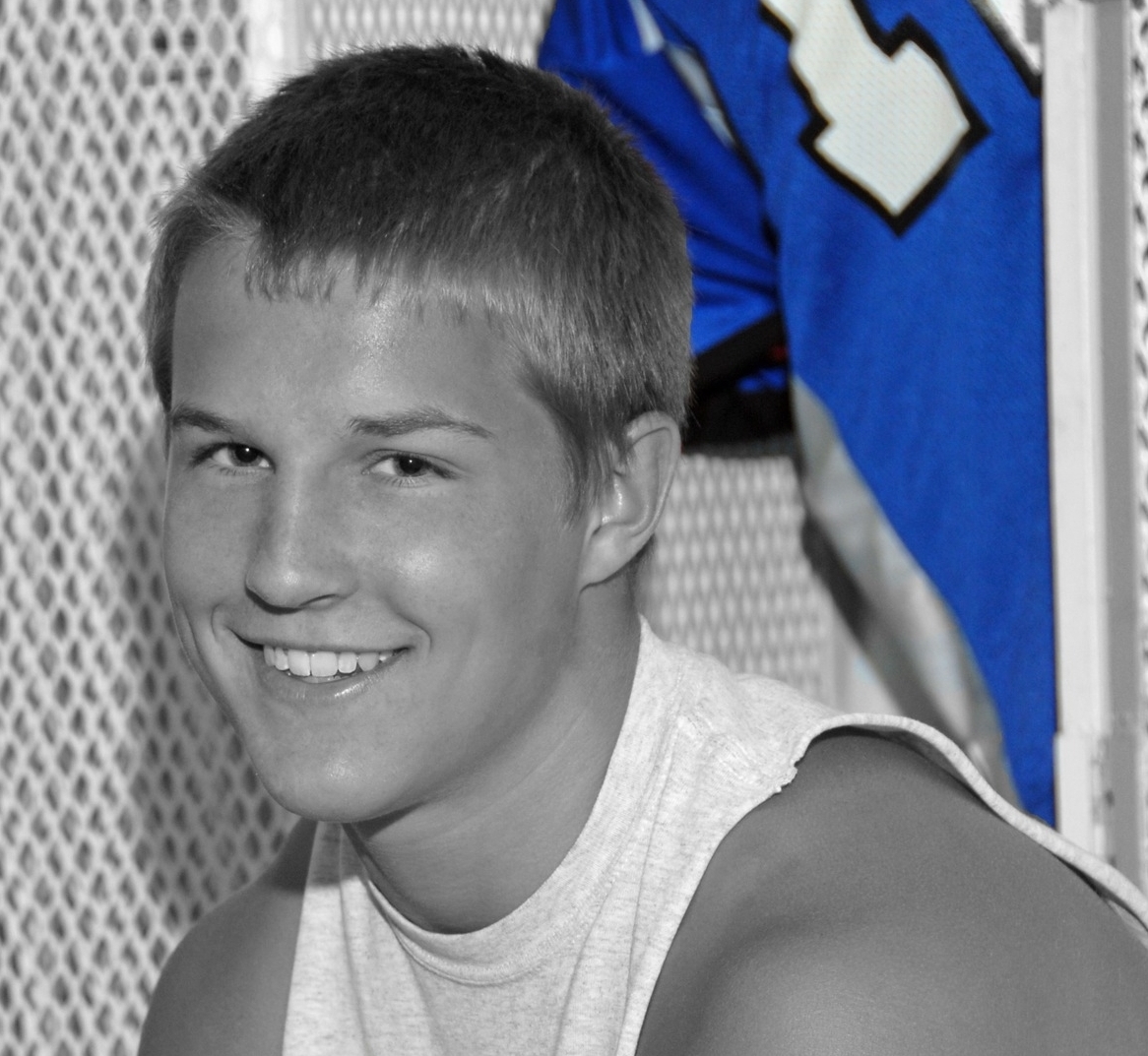 ISHPEMING HIGH SCHOOL football coach Jeff Olson has started a big push to get the poignant and tragic story of his son Daniel out to high schoolers all across Michigan.

Olson and his supporters recently sent out a mass mailing to virtually all the high schools in the state, informing them of the documentary, Do It for Daniel. It tells the story of Daniel Olson, a star quarterback for Ishpeming who suffered from extreme anxiety and depression and ultimately took his own life a few years ago.

A tough story to watch but compelling. And instructive for any high school kids who might be facing the same demons.

Earlier this year, Jeff Olson presented the documentary to fifteen schools and then conducted discussions with students afterwards. Now he’s hoping to reach students all across the state.

He’s a father who’s endured almost unimaginable tragedy but is now on a mission to help other parents and children.